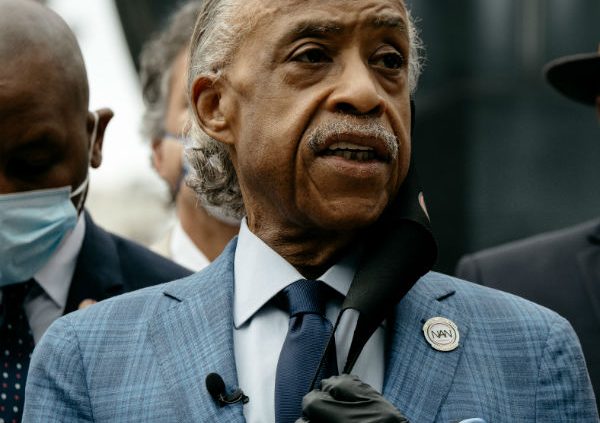 Reverend Al Sharpton traveled to Minneapolis this week to demand justice for George Floyd, the unarmed Black man who was killed by a Minneapolis Police Officer who pinned Mr. Floyd’s neck with his knee for nine minutes.
On Thursday, Reverend Sharpton joined Gwen Carr, the mother of Eric Garner, at a rally at the location where Mr. Floyd was killed and called for swift accountability for the officers involved in the killing. In the wake of riots and looting, Reverend Sharpton called for calm but noted that the pain and anger is real.
“We understand the anger,” Reverend Sharpton said on MSNBC. “However the anger should not be exploited in the wrong way.”
While in Minneapolis, Reverend Sharpton met with community leaders and activists at World Outreach for Christ Church on strategy and spoke to the Governor of Minnesota Tim Walz and Attorney General Keith Ellison and pressed for the arrest of all four officers involved in Mr. Floyd’s death.
“In the case of Eric Garner, it took us five years to get him fired. If they had prosecuted that officer, maybe Floyd would be alive today.”
Reverend Sharpton also discussed next steps for how the arrests and eventual prosecution of the officers involved could be carried out. “You do not need anything more than you have now to arrest those four police officers,” he said. “There is probable cause right now.”
On Saturday, Rev. Sharpton and the National Action Network will call together people from across the country to be part of the “We Can’t Breathe” movement. Stay tuned for more updates, as NAN continues to rally until we get justice.
https://nationalactionnetworkla.com/wp-content/uploads/2020/06/GetFile.jpg 500 600 alenise01@gmail.com http://nationalactionnetworkla.com/wp-content/uploads/2022/07/JPG-scaled.jpg alenise01@gmail.com2020-05-27 19:38:342020-06-10 19:41:33BREAKING NEWS: Rev. Al Sharpton Demands Justice For The Death Of George Floyd
Service Salute To Omega Psi Phi Tau Tau