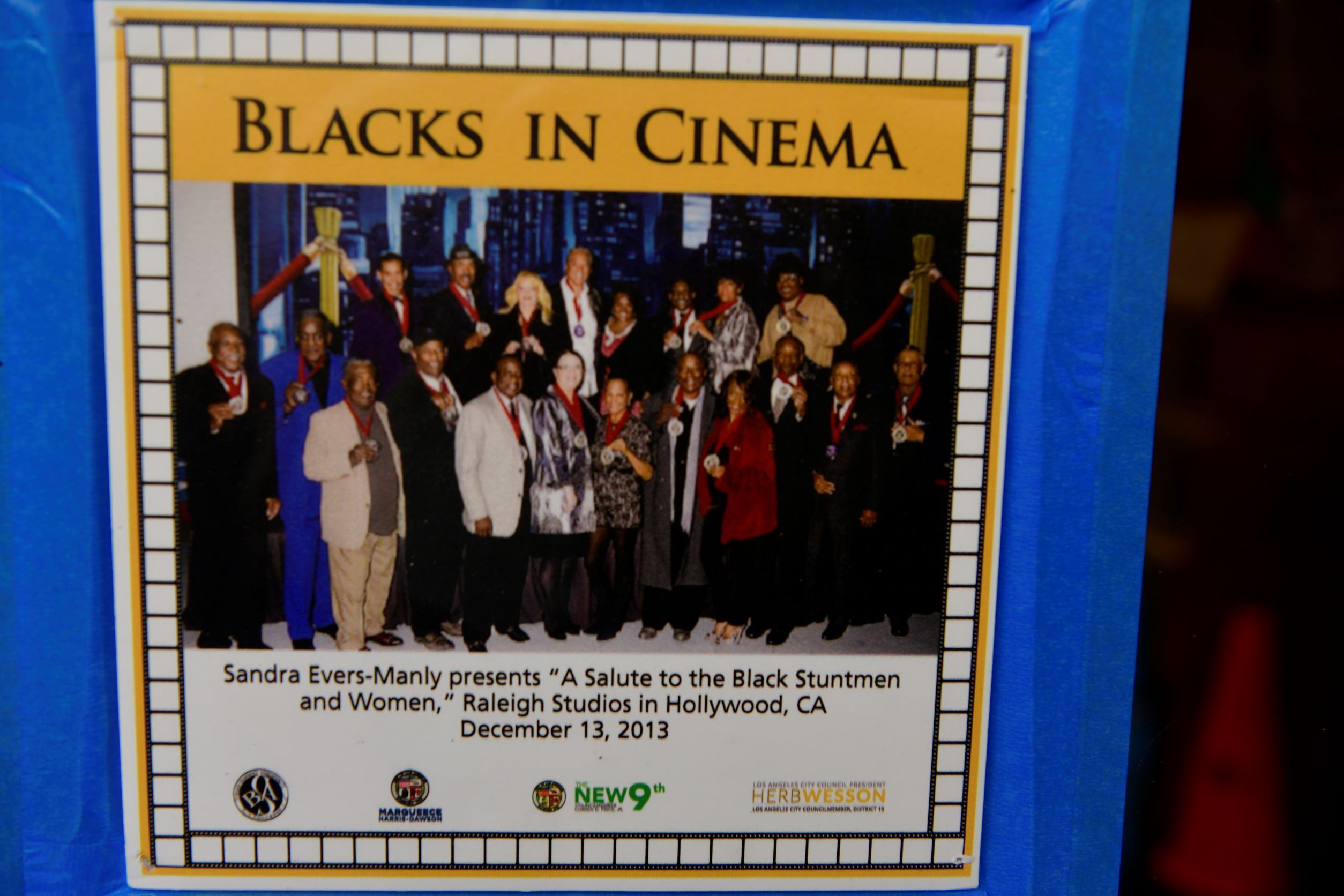 LEIMERT PARK — In commemoration of African American Heritage Month, an exhibit chronicling the legacy of Black films on the big and small screen is on display in Leimert Park Village.

The outdoor self-guided walking exhibit is free and currently on display at the corner of Degnan Avenue and 43rd Street and in the courtyard adjacent to Community Build, 4305 Degnan Ave.

“What’s interesting is in 2019, the number one movie, ‘Black Panther’ was almost a mirror image of the films from the 70s,” said Albert Lord, vice president of government relations and arts programs for the nonprofit Community Build, which is responsible for the exhibit. “The 70s recognized Black power, the Vietnam War, the hippy generation, the fight for gender equality and of course, the [Black] Panther Party, all the general themes of Black Panther.

“I thought it would interesting to highlight both in the exhibit.”

A major part of the period covered in Blacks in Cinema are the “Blaxploitation” films of the 1970s.

According to the Separate Cinema Archive, a key resource for the exhibit, the late 1960s and early 1970s ushered in a new trend of Black action films. Violent and racially motivated films such as “Shaft” and “Superfly” emphasized rebellion against authority.

The films also created Black heroes on screen that, in the wake of the civil rights movement, African-American audiences needed and welcomed. Those films featured former professional athletes like Fred Williamson, Carl Weathers and Bernie Casey and launched the career of actress Pam Grier (“Coffy,” “Foxy Brown”), who became known as the queen of Black action genre.

The exhibit also spotlights the rise of Black stunt men and woman. Prior to the 1967 establishment of the Black Stuntmen and Women’s Association, stunts for Black actors were done by white men “painted down” to a darker complexion.

Change happened when the organization filed lawsuits against several major movie studios and Black actors refused to have white stunt doubles. Some of the early television shows and films that featured Black stuntmen include “Mission Impossible,” “The Mod Squad,” “Dirty Harry,” “I Spy” and “Across 110th Street.”

Lord served as L.A. City Councilman Herb Wesson’s deputy for 16 years. In that capacity he helped produce the city’s African American Heritage Month exhibitions each February along the bridge leading to the City Council Chambers.

The exhibitions reflected social, cultural and political occurrences in American society and were the brainchild of Wesson, who was seeking a way to commemorate Black history month.

Blacks in Cinema was originally displayed in Los Angeles City Hall in 2019 as a part of African American Heritage Month commemoration.

“The role Blacks played in American cinema is a very important part of our history,” said Robert Sausedo, president of Community Build. “I remember watching movies with my mom and her sisters. Seeing Blacks on screen was powerful and gave me an image that has stayed with me. This exhibit is a reminder of where we came from and shows the foundation of how Blacks are portrayed in films today.”

Sharpton to Deliver Eulogy at Funeral of 14-Year-Old Killed by Stray Police...

The Home Depot Hiring More Than 5,000 in Los Angeles
Scroll to top