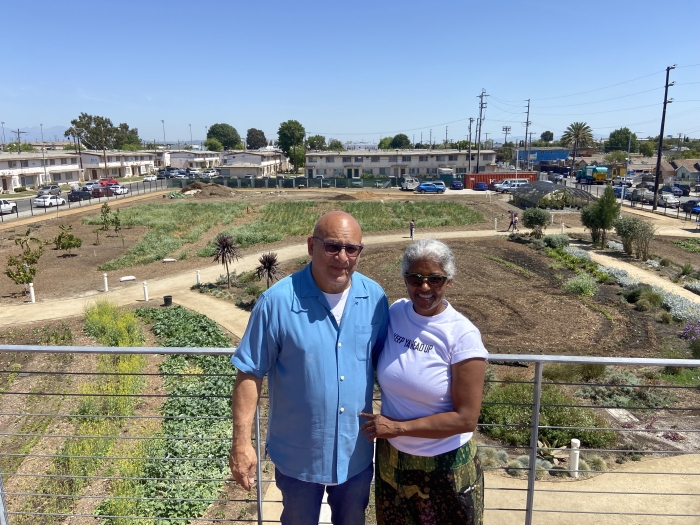 Tim and Janine Watkins on the center balcony with Mudtown Farms in the background. (Courtesy photo)

Fresh vegetables, herbs and fruits are growing on 2.5 acres in the heart of Watts. Formally called Mudtown Farms, the huge urban agricultural park will provide homegrown produce and a healthy environment for local residents.

On April 8, the grand opening of Mudtown Farms took place with civic leaders and community members uniting to celebrate the occasion. In addition to the large swath of land, the site also contains a two-story training center, greenhouse, orchard and outdoor classroom.

Other notable features on the site are flower gardens, raised beds, exercise stations and walking paths. Also, the center will offer a range of classes – like yoga and physical fitness – to promote community health and wellness. 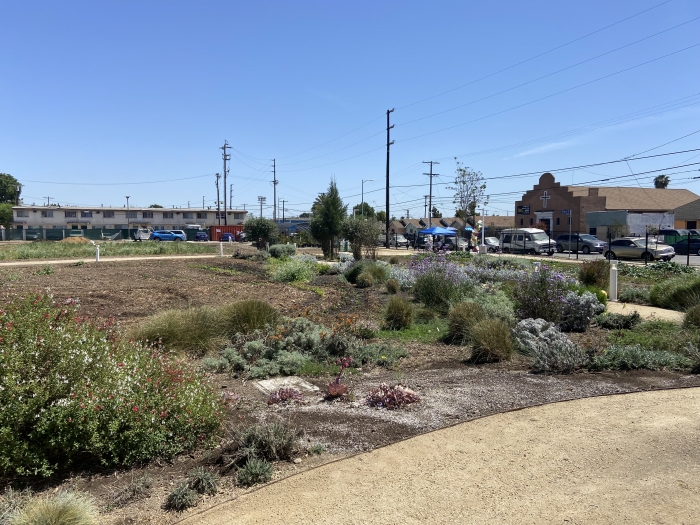 The Watts Labor Community Action Committee along with other grassroots organizations played key roles in launching Mudtown, according to Tim and Janine Watkins of WLCAC.

“While WLCAC led this effort to obtain the $5 million grant and create the farm, many other people and agencies supported this work,” said Janine.

Mudtown Farms is actually the result of a nearly 20-year campaign for WLCAC.  In 2003, the nonprofit conceived the idea for the farm and purchased the property in 2005.  Seven years later, the group received the funding from the City of Los Angeles Proposition K, California State Parks Proposition 84 and the Trust for Public Land.

“I feel great about getting to this point of opening Mudtown Farms. It’s a dream come true for Watts. When we first thought about this in 2003, it was before Barack Obama was elected and Michelle Obama graced us with her emphasis on access to healthy food,” explained Tim. 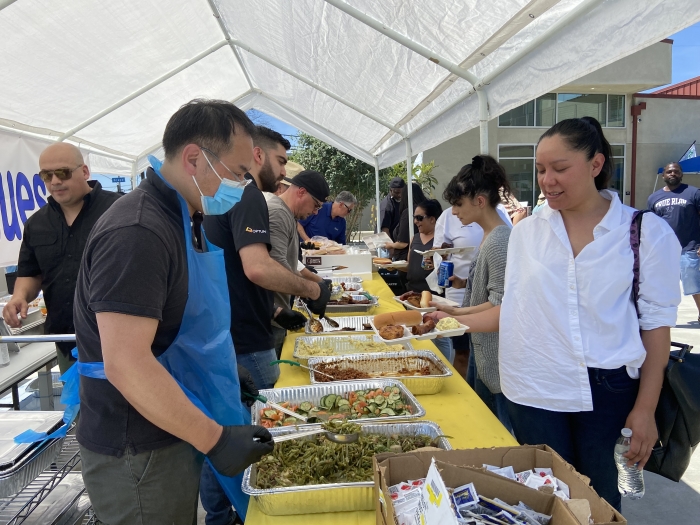 WLCAC served refreshments to the community during the grand opening. (Cora J. Fossett/LAWT)

“When Michelle started talking about it, all of a sudden, urban gardening became very popular and we were able to get the funding.  Now, all we need is a $1 million a year to keep it going,” he noted.

Currently, staff and volunteers perform the farming, but soon school children will have an opportunity to learn about the basics of farming and its connection to STEAM (science, technology, engineering, arts, math) disciplines.

“Children will learn how to grow food, the importance of nutrition, and learn about the density in their food. We expect Mudtown Farms to serve as a center where we can address food security, positive health outcomes and environmental stewardship,” Janine said.