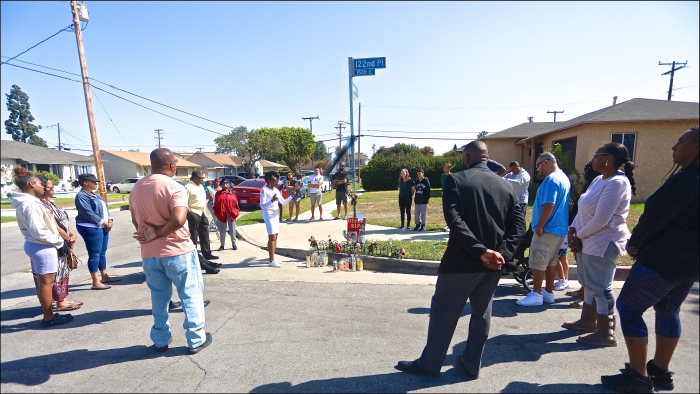 Vowing not to let the unexpected shooting of several people frighten their quiet neighborhood, the residents of Blakely Avenue in Willowbrook held a vigil on April 17 in memory of those who were killed and injured.

A tragic incident on April 10 resulted in the death of 17-year-old Devin Pugh of Downey and 40-year-old Timothy Ford Sr. of Moreno Valley. Also, a third person was critically injured, three others suffered minor injuries, and a seventh victim drove herself to the hospital with a non-threatening gunshot wound.

The vigil was organized by Carmen Taylor Jones, who has lived on the street for decades.  She rallied community members to gather at the intersection of East 122nd Place and Blakely Avenue to light candles and lift up prayers for everyone affected – both living and dead – by the sad episode.

“We did this for the entire neighborhood,” insisted Jones. “I was out of town when this actually occurred and my brother called and said, ‘Carmen, there’s trouble. There’re two men lying on the ground dying right now,’ and I almost threw up because I got a call like that before.”

In 2008, Jones was in Texas when her oldest son phoned to say that her 15-year-old daughter, Breon Symonne Taylor, had been shot and she died from her wounds.

“So, I know that pain and how that type of tragedy and trauma can be so destructive unless someone intentionally tries to lift it and bring light to it and find some good and purpose,” noted Jones.

“And I realized that God had given me that gift. I knew it had to be me because the enemy brought it to my door. I had to step over a body to get into my house, so I couldn’t avoid it,” she said. 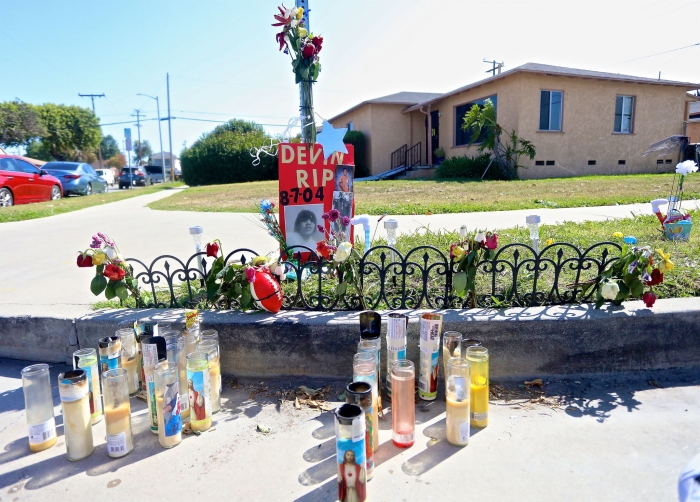 On April 14, Jones and a few neighbors met at the intersection of the shooting and Pugh’s mother also visited the site where her only child was killed.  After praying with the mother, Jones suggested that a memorial be created and people volunteered to purchase the needed items.

“Every yard in the entire three blocks of Blakely has a memorial candle. Assemblyman Mike Gipson came out to view the yards and people from other nearby streets have asked us to help them place a memorial in their yards, so we’ll be doing that over the next few weeks,” explained Jones, who is the former chief deputy for the 37th Congressional District and former Southern California regional manager for the U.S. Census Bureau.

“But even with all of that, nothing precludes you from violence,” she admitted. Still undaunted, Jones joined Gipson on April 15 for his press conference about the danger of ghost guns and the following day, alerted her neighborhood that the vigil would take place on Sunday at 3 p.m.

“This was not about fault, this was not about blame – who shot John – and not about legislation. It’s about our hearts and our eyes that are filled with tears and our souls that were just wounded. For that reason, we came together,” Jones said.

“It was very important to us to send a message to our neighborhood and our community that it’s not business as usual. Yes, we cleaned up the glass and people are patching up the bullet holes in their walls and cars, but we hurt over here. We are in sorrow over here. It’s a huge loss,” she added.

“We know that only light can penetrate the dark. Our commitment to bringing light to this issue is a priority right now.”