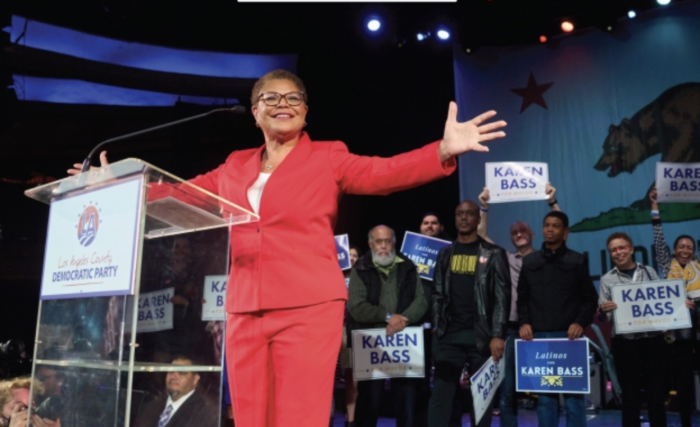 U.S. Rep. Karen Bass will soon have a new title – “Madam Mayor.” With a lead of more than 5% that is continuing to grow, the longtime community advocate is pulling away from billionaire real estate developer Rick Caruso.

One week after election night where Caruso led by a very slim margin of less than 2%, Bass has not only surpassed Caruso, but has also enlarged the gap making the race virtually impossible for Caruso to overcome.

The results posted on Tuesday, Nov. 15, by the L.A. County Registrar-Recorder/County Clerk’s office marks the fifth update since election night that Bass has trended upwards to a point where it would be almost impossible for Caruso to overcome.

Representative Karen Bass now holds a 52.55% – 47.45% lead following Tuesday night’s update.  Bass has held a 60% – 40% margin or better over Caruso in every ballot count released since Thursday, November 10. Bass’ late surge is a repeat of the June 7 primary election where Caruso had a slight lead over the Congresswoman and several other candidates on election night, only to see that advantage disappear and Bass ending up the top vote getter, leading all challengers by 7% or more. 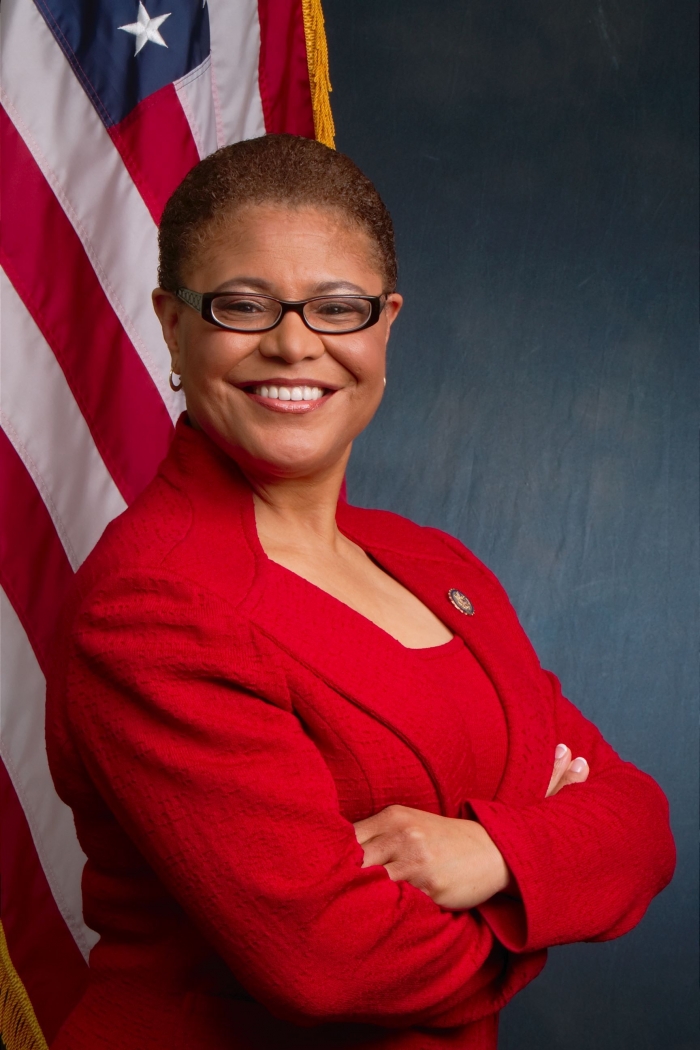 Rick Caruso spent an ‘extraordinary amount of money in an attempt to win the Los Angeles mayoral race with a budget exceeding $100,000,000, compared to Bass who raised and spent in the neighborhood of $9,000,000.

“In biblical terms, this was David vs. Goliath or Karen vs. Goliath.  The amount of money that Rick Caruso spent in an attempt to buy the mayor’s race was unprecedented, but the results of this election show that ‘Dollar Power’ cannot overcome ‘People Power,’ ” said Danny J. Bakewell, Sr., board chairman of the Los Angeles Brotherhood Crusade and executive publisher of the Los Angeles Sentinel and Bakewell Media.

Karen Bass is a longtime Democrat with years of political and community organizing experience.  Bass, who was the first African American woman ever elected Speaker of the California State Assembly, will now make history again as Los Angeles first female mayor and only the second African American mayor following in the footsteps of Tom Bradley, who defeated Sam Yorty for mayor in 1973.

“The citizens of Los Angeles saw through Rick Caruso’s claims to be a Democrat.  We all knew that he was a lifelong Trump-like Republican and only changed his voter registration in order to run for mayor,” noted Tracy Mitchell, president of Mothers in Action, a local nonprofit that provides numerous resources to the residents of the South Los Angeles community.

The lead in the vote totals changed hands three times in the hours immediately after the polls closed on Nov. 8, with Caruso holding a 2.5-point lead on Wednesday, Nov. 9. But since then, every new release of voting information from county officials has favored Bass, with the congresswoman taking the lead on Friday, Nov. 11.

Unlike in years past, or pre-COVID, where votes were generally counted in precincts and pundits could forecast outcomes based upon a candidates popularity in one area over the other, now we are in a post-COVID environment.  In post-COVID times and with mail-in ballots becoming the norm throughout California, the late ballot vote counts come from a broad array of areas, demonstrating that Bass popularity is citywide instead of in a distinct part of the area such as her congressional district in South Los Angeles.

This fact means that there is no reason to expect that any batch of ballots will be largely different from the previous voting trends, which have been coming in for over a week.  At this point, the likelihood that Rick Caruso could reverse a week’s worth of election trends is virtually impossible and he could only win with an astounding reversal of the current voting trends, which appears to be highly unlikely.

As the votes are counted, most campaigns await a news agency to call the election and the victory.  Given the continuous voting trends and the virtually mathematical impossibility of a Caruso victory, the Los Angeles Sentinel is proud to proclaim Karen Bass as the winner and Mayor of the city of Los Angeles!

Karen Bass is currently in Washington D.C., fulfilling her role as the Congressional Representative for District 37, (that is, until Sydney Kamlager-Dove, who was currently leads Jan Perry in a race to succeed Bass in Congress, assumes that spot). Rep. Bass stated, “I am honored and grateful for the support we are continuing to see. I am optimistic and looking forward to the next update.”

The Caruso campaign has yet to release a statement concerning the continuous slide, falling further and further behind.  But earlier ton Tuesday, Nov. 15, the Caruso campaign did email out a letter to “supporters” thanking them for their backing and encouraging voters to track their ballots and insinuating that there were possible missed signatures and/or mismatch signatures on the ballots, in hopes of somehow reversing the trend of falling further and further behind.

The City Council voted to approve the Immigrant Affairs, Civil Rights, And Equity report to design the framework and establish a five-year action plan for an Office of Racial Equity. https://civilandhumanrights.lacity.org/our-programs/office-racial-equity
The new office will operate under the Civil, Human Rights, and Equity Department (CHRED) and help establish Citywide definitions and specific approaches necessary to implement and achieve equity principles to be embedded as a core element of the goals, objectives and strategies of the City. To read more on the approved report, please click here.
https://nationalactionnetworkla.com/wp-content/uploads/2022/11/racial-equity-department-2.jpg 307 550 alenise01@gmail.com http://nationalactionnetworkla.com/wp-content/uploads/2022/07/JPG-scaled.jpg alenise01@gmail.com2022-11-01 19:29:582022-11-30 19:33:42The Office Of Racial Equity Special announcement for District 9 neighbors! Are you concerned about illegal cannabis activity and the City of LA’s stance on enforcement?
CD9 residents are invited to participate in the “Cannabis in Your Community: Partnering on Progressive Enforcement” virtual town hall, happening next Thursday, Oct. 27 at 6 p.m.
For more information, visit the LA Department of Cannabis Regulation website at cannabis.lacity.org, via email at cannabis@lacity.org or call (213) 978-0738.
Click here for the Zoom link.
https://nationalactionnetworkla.com/wp-content/uploads/2022/10/unnamed.jpg 1275 1650 alenise01@gmail.com http://nationalactionnetworkla.com/wp-content/uploads/2022/07/JPG-scaled.jpg alenise01@gmail.com2022-10-24 18:59:082022-10-26 19:42:23Cannabis In Our Community – A Virtual Townhall

“Unacceptable” and “appalling” is how White House Press Secretary Karine Jean-Pierre described the crude and disparaging racist remarks that surfaced this week in a recording of three city council members in Los Angeles. President Biden believes all three council members should give up their seats, Jean-Pierre said. The recording was first reported by the Los Angeles Times on Sunday.

On Tuesday, Councilwoman Nury Martinez announced that she intends to take a leave of absence, but she stopped short of submitting her resignation. Martinez employed racist and derogatory language to describe the son – who is black – of another council member, using a Spanish term meaning “little monkey” and stating that the boy needed “a beatdown.” In addition, she described Oaxacan immigrants in Koreatown as “short little dark people.” Council members Gil Cedillo and Kevin de León also participated in the conversation.

The president’s statement comes as he embarks on a West Coast tour where he is scheduled for several public events, including a fundraiser with Democratic Congresswoman Nancy Pelosi. He joined high-ranking California officials in his call for the council members’ resignations. Scores of outraged protesters interrupted a city council meeting on Tuesday.

The White House used the occasion to excoriate Republicans for their treatment of incidents of racism within their own party.

Councilman Mike Bonin — whose son was the subject of the derogatory remarks — gave an emotional statement on Tuesday. “I take a lot of hits, but my son?” said Bonin. He called his fellow council members’ comments unforgivable. The City Council adopted the Ad Hoc Committee on COVID-19 Recovery and Neighborhood Investment Report and recommendations. The City eviction moratorium is slated to end Jan. 31, 2023. Tenants who have missed payments since March 2020 would have to meet two repayment deadlines.
Under state law, tenants will have until Aug. 1, 2023 to pay back missed rent between March 1, 2020, and Sept. 30, 2021. Under the city’s moratorium, tenants would have until Feb. 1, 2024 to repay rent accumulated from Oct. 1, 2021 to Feb. 1, 2023. In rent-controlled apartments, rent increases will also be allowed to resume beginning February 2024.
The City will provide relocation assistance for evictions deemed no-fault evictions. There are also protections against no-fault evictions for unauthorized pets or residents who aren’t listed on leases until Jan. 31, 2024. The report also explores initiating just-cause rules, requiring specific reasons for landlords to evict tenants in all units, not just those under rent control. To read the report that was approved, please click here. To also read amending motions adopted, passed, click here.
https://nationalactionnetworkla.com/wp-content/uploads/2022/10/eviction-ending-la.jpg 416 640 alenise01@gmail.com http://nationalactionnetworkla.com/wp-content/uploads/2022/07/JPG-scaled.jpg alenise01@gmail.com2022-10-04 18:43:302022-10-12 18:44:43City Council Ends Eviction Moratorium 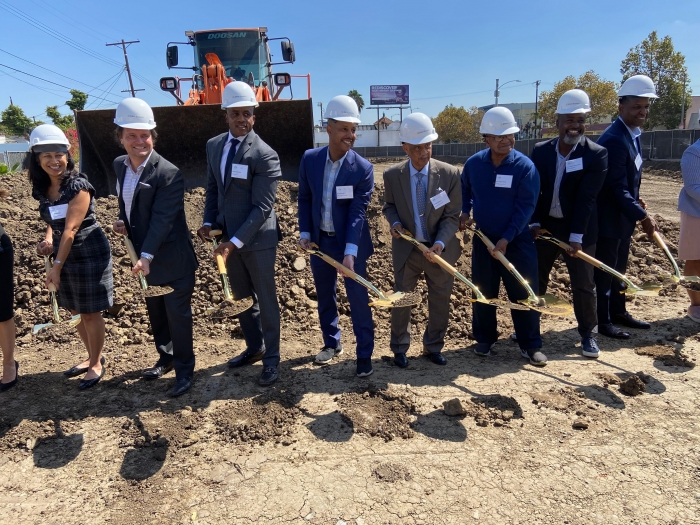 Saki S. Middleton,  president of John Stanley; Dr. Carl C. Baccus, Southside senior pastor; and Councilmember Marqueece Harris-Dawson (CD 8) were among the participants in the gala event held on Southside’s campus located at 1655 W. Manchester Avenue. The project, which will contain commercial space on the ground floor, will be erected on the former parking lot of the church.

The City of Los Angeles Housing Department provided a $9.22 Million Proposition HHH Supportive Housing Loan and issued $19,910,000 in Tax Exempt and Taxable Bonds for the construction of the project, and the Housing Authority of the City of Los Angeles is providing 36 Project Based Vouchers for Chronically Homeless and Homeless Seniors.  It is slated to serve 18 chronically homeless and 18 homeless seniors and 14 non-homeless independent senior households.

“This is a true public-private partnership,” said Middleton. “It will provide homeless seniors with permanent housing and supportive services which will enhance their lives and improve the quality of the neighborhood.” 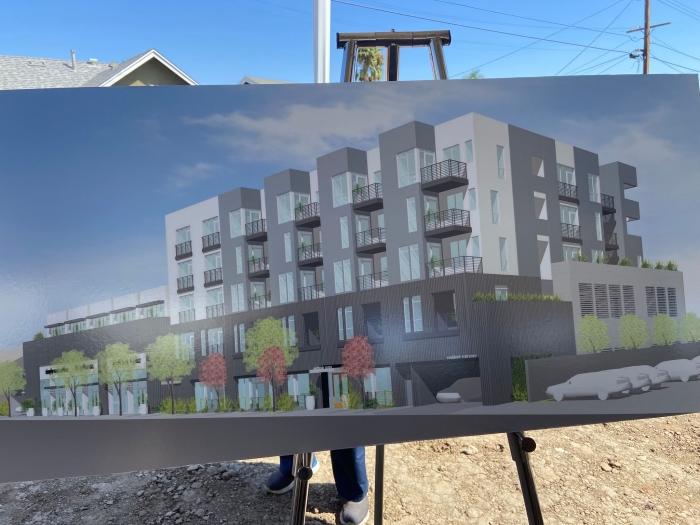 “Such a long-awaited development we are so grateful to God, the church members, community, and the city for joining us in providing quality housing and services in the neighborhood,” said Pastor Baccus.

“To whom much is given, much is required. We are thankful God gave us this opportunity to give to others with this project.” We look forward to continuing to serve our community,” noted Chris Baccus, executive director of Concerned Citizens Community Involvement, Southside community development corporation.

The project will have 20 Studio/one bath and 30 One-bedroom/one bath units and 1,785 Ground Floor Commercial spaces. Amenities will include a 3rd level outdoor courtyard that includes a bbq area, sitting areas, and 1,500 square feet of indoor community space that includes a lounge, kitchen, flex room, and computer/classroom.

The project also has a 4th Floor gym, 3rd-floor laundry facility, and parking for the residents. The units will serve homeless senior and independent senior households fifty-five (55) years and older whose annual household incomes are at or below 60% of the Los Angeles County area median income.

Voters to decide whether LA hotels should house the homeless The LA City Council voted 12-0 to send a measure that calls for the utilization of vacant hotel rooms for the unhoused to be put on the March 2024 election ballot. Under the proposal, hotels with 15 or more rooms would be required to continually report vacancies to the Los Angeles Housing Department (LAHD). The LAHD ran program would then commence referrals for individuals and families experiencing homelessness and pay “fair market rate” to the hotels through prepaid vouchers.
The initiative would also add additional affordable housing requirements for new hotel developments with 100 rooms or more that replace existing housing units. Developers would be required to provide a proportional number of affordable housing units at the hotels or in the surrounding neighborhood. To read the motion, click here.
https://nationalactionnetworkla.com/wp-content/uploads/2022/08/hotel-for-homeless.jpg 183 276 alenise01@gmail.com http://nationalactionnetworkla.com/wp-content/uploads/2022/07/JPG-scaled.jpg alenise01@gmail.com2022-08-03 23:17:432022-08-10 23:32:50Voters to decide whether LA hotels should house the homeless