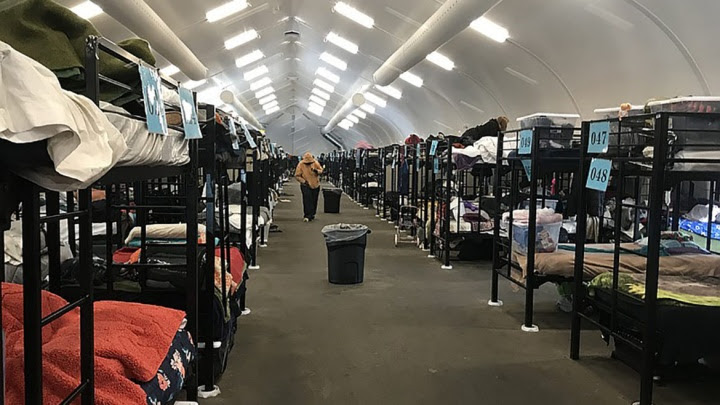 After she became homeless, Callie Rutter entered Bridges at Kraemer Place, an emergency shelter that promises to….

“connect participants to housing as quickly as possible.” For her, however, the shelter has been a bridge to nowhere.
The program claims to place residents in a home in six months or less. But Callie has lived at the shelter — a converted warehouse that holds around 200 people — for almost a year, and many of her fellow residents have lived there much longer.
The shelter should not make promises it cannot keep. But it is California’s elected officials who have neglected to commit the resources necessary to make the shelter’s promise a reality. Their failure to fully fund and develop enough permanent, affordable housing to end the homelessness crisis leaves people like Callie languishing in shelters or on the streets for years and sometimes even decades.
The hard numbers tell it all. In California, there are only 22 subsidized affordable units of housing per 100 extremely low-income households who need them.
Because of this shortage, people who are priced out of California’s exorbitantly expensive housing market face five to 10 year waits for a permanent, affordable home — that is, if they can get on the waiting lists, which stay closed for years. It is no wonder that California has the largest homeless population in the nation.
Callie should not be living in a shelter. She has been diagnosed with cancer and spends much of her time in chemotherapy and radiation treatments. Her immune system is compromised, and the shelter environment exposes her to contagious diseases. She does her best to manage her side effects, which include incapacitating bouts of nausea and fatigue, while sharing a bathroom and sleeping area with hundreds of people. But the stress of residing in a cramped living space with so many other residents is wearing her down.
https://nationalactionnetworkla.com/wp-content/uploads/2015/06/homeless.jpg 405 720 alenise01@gmail.com http://nationalactionnetworkla.com/wp-content/uploads/2022/07/JPG-scaled.jpg alenise01@gmail.com2019-12-16 14:28:302020-05-04 23:55:31Ending Homelessness: Arguing for Housing First
1 reply