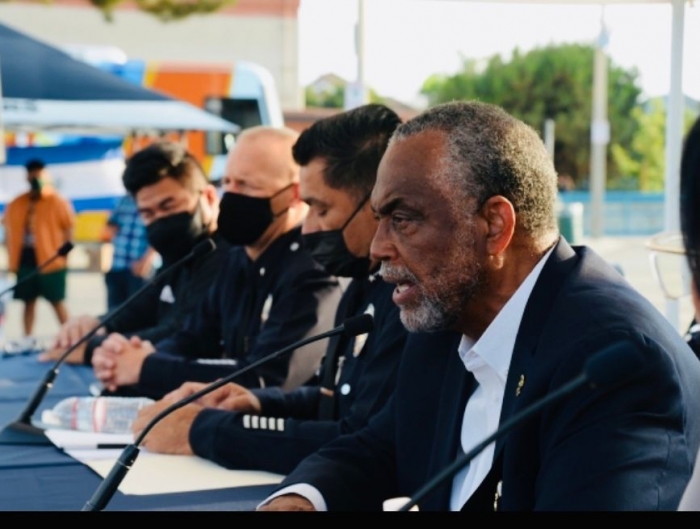 According to Michael Hoffman, special agent in charge of the U.S.
Bureau of Alcohol, Tobacco, Firearms and Explosives Los Angeles office, the LAPD’s containment vessel was designed to handle repeated detonations of 19 pounds of TNT equivalent at a time or a single detonation of 33 pounds of explosives before being returned to its manufacturer for analysis.

But the LAPD bomb squad miscalculated the amount of fireworks placed into a containment vessel, resulting in a massive explosion that damaged several residences in South Los Angeles. Officers had loaded the truck with 39.85 pounds of explosives, Hoffman said. LAPD personnel visually estimated the
weight of the explosives to be about 16 pounds.

Moore said he directed the LAPD to no longer use a total containment
vessel to detonate fireworks in residential locations. The LAPD will pursue acquiring a designated site in or near the city to take explosives for safe detonation.

Moore initially announced the change at a town hall meeting with residents Monday night, and reiterated the move during a virtual town hall Tuesday.   The department will also require that all explosives the bomb squad attempts to detonate be weighed first, and “checks and balances” will be put in place to ensure those calculations are correct, Moore said. Personnel responsible for the explosion are no longer working on the bomb squad, Moore added, saying he would make a determination regarding discipline. The names of
the officers have not been released.

ATF conducted more than 40 interviews with residents, bomb squad
members, LAPD personnel and witnesses on scene during the explosion. It also reviewed surveillance video for the report.

The report found that the “explosion that occurred was accidental and was caused by overloading the (total containment vessel) with more explosives than it was designed for during a single detonation,” Hoffman said.

“After careful analysis of all the facts, we are absolutely certain
of the conclusion,” Hoffman said.  City Councilman Curren D. Price Jr. who represents the area where the explosion took place, said Monday evening the report “confirms what we already knew — the negligence at the hands of the LAPD showed zero regard for our community.

“As trained professionals in one of the largest police departments in America, I still cannot fathom how the LAPD thought it was acceptable to merely eyeball unstable explosives in the middle of a densely populated neighborhood,” Price said.

“Since Day One, I have called for an independent investigation and accountability of all those involved. Now, it’s up to the LAPD to face the consequences of this colossal failure and do right by our neighbors once and for all.”

On Sept. 1, Price introduced a motion seeking $5 million — some of which would come from the Los Angeles Police Department’s $1.76 billion budget — to help South Los Angeles residents recover from the explosion.
The city has received 191 claims for damages from community members.

Forty-two claims have been settled.

The explosion occurred after the department seized the fireworks from
Arturo Ceja III, 27, a resident of East 27th Street. He was arrested and
charged with illegally transporting tons of explosives. Ceja planned to sell the fireworks throughout the neighborhood in celebration of the Fourth of July, according to the U.S. Attorney’s Office.
Ceja pleaded not guilty to the federal charges on Aug 17.

Presidential Delegation to Attend the Inauguration of Republic of Zambia’s...