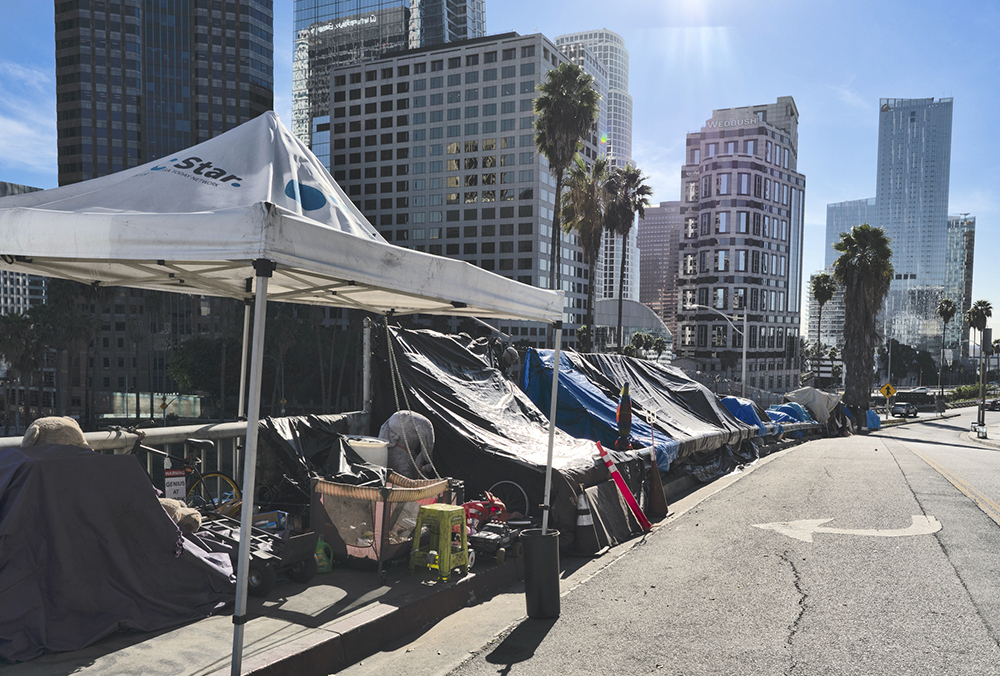 LOS ANGELES — The City Council approved a street engagement strategy Sept. 14 to accompany its sweeping ordinance to restrict sleeping and homeless encampments in certain areas of the city.

The ordinance went into effect on Sept. 3, but enforcement was limited to accessibility obstructions pending the city’s approval of the street engagement strategy.

Under the engagement framework, which was approved 14-0, each council office will have at least three engagement teams to deploy to areas chosen for the ordinance’s enforcement. The teams will assess the encampments, determine how long engagement will take place, collaborate with city and county departments, as well as nonprofits, and connect encampment residents with services and interim and permanent housing placements.

Each council office will have control over deployment for their engagement teams and additional teams will be geographically based, with one in Hollywood, one in the Civic Center, one in the Broadway/Interstate 110 corridor and four in Skid Row.

“Before us today we have essentially a first of its kind citywide street engagement strategy,” said Councilman Mark Ridley-Thomas, who chairs the city’s Homelessness and Poverty Committee. “It provides a uniform framework to provide street-based services and connections to housing, both interim and permanent, to unsheltered residents living in this city.”

The framework was developed by the city administrative officer and the chief legislative analyst.

“The time for street engagement couldn’t be more urgent,” Ridley-Thomas said. “There are no quick fixes to this crisis — and an ‘enforcement alone’ approach would simply shuffle unhoused residents throughout the city, from one neighborhood to another.

“This is a crisis that requires care, compassion and compliance, and this strategy can be our roadmap to seeing a true change on our streets,” he added.

The city’s new anti-camping law was approved by the City Council and signed by Mayor Eric Garcetti at the end of July. It modified the city’s current anti-camping law in Municipal Code 41.18 to prohibit sitting, sleeping, lying, storing personal property or otherwise obstructing the public right-of-way in several areas of the city, including within two feet of any fire hydrant or fire plug; within five feet of any operational or utilizable entrance or exit; within 10 feet of a loading dock or driveway; in a manner that interferes with any activity for which the city has issued a permit or restricts accessible passage as required by the Americans with Disabilities Act; or anywhere within a street, including bike paths.

The law also prohibits encampments within 500 feet of a “sensitive” facility including schools, day care facilities, parks and libraries, once the council passes a resolution to designate a specific area for enforcement, posts signage and gives notice of the date that the ordinance will be enforced for the area.

Areas include: up to 500 feet of a designated overpass, underpass, freeway ramp, tunnel, bridge, pedestrian bridge, subway, wash or spreading ground, railroad track or where lodging unsheltered or in tents is unhealthy, unsafe and incompatible with safe passage; and up to 1,000 feet of a facility opened after Jan. 1, 2018, that provides shelter, safe sleeping, safe parking or navigation centers for persons experiencing homelessness.

The ordinance will also allow the city to prevent encampments for a period of no longer than one year in areas that are deemed an ongoing threat to public health or safety, including due to: death or serious bodily injury of any person at the location due to a hazardous condition; repeated serious or violent crimes or threats of serious or violent crimes, including human trafficking; and fires at the location.

The street engagement strategy also includes frameworks to conduct engagement during emergencies, including national disasters and public health matters, like the 2017 Hepatitis A outbreak.

Councilman Mike Bonin introduced amendments to the framework that will be reviewed by the Homelessness and Poverty Committee. He said the amendments are meant to address the reasons why people may resist housing and shelter placements.

“I think if we endorse and base policy based on the idea of service resistance, we’re blaming people who are unhoused for being unhoused,” Bonin said. “And I think it is really incumbent upon us to look at why somebody would say no to something that we think is a reasonable offer of shelter or housing.”

His proposed amendments include:

• Matching the needs of the unhoused individual with a valid offer of shelter housing, including keeping families together and offering more private accommodations, as opposed to co-ed shelters, for domestic violence and sexual assault survivors.

• Offering a pathway to permanent housing with a valid offer of interim shelter, so people are assured that they won’t end up back on the streets without their belongings.

• And offering alternatives to congregate shelters during times when the Centers for Disease Control and L.A. County Department of Public Health advise against congregate accommodations.

Bonin added that he wished the city enacted the street engagement strategy years ago, and not as an accompaniment to enforcement of the anti-camping ordinance, which Bonin voted against.

Before that ordinance’s vote, Bonin cited the Los Angeles Homeless Services Authority’s statistic that the city only has shelter beds for 39% of the unhoused population.