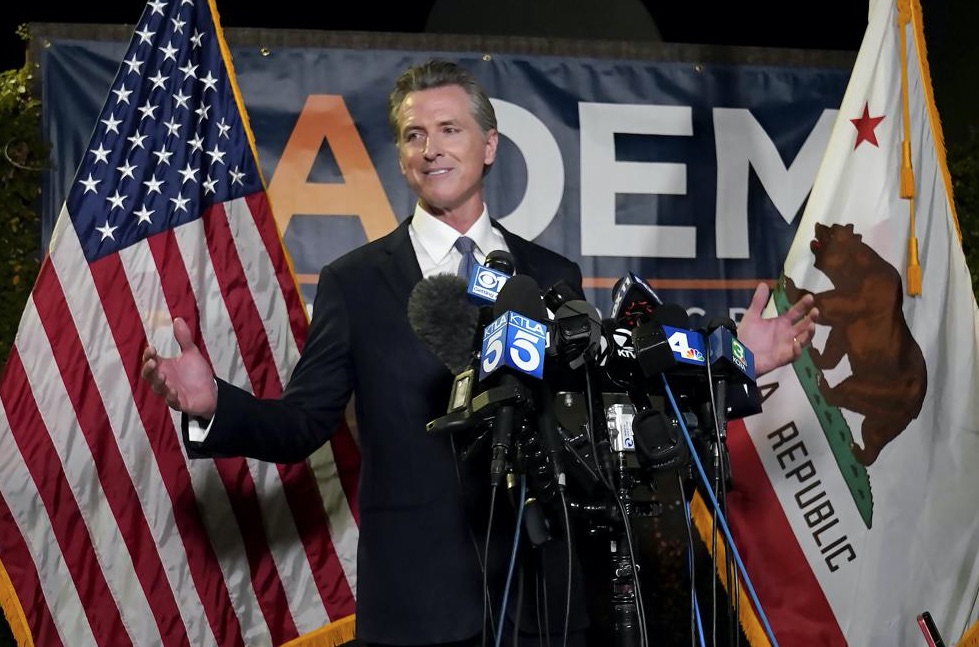 Gov. Gavin Newsom trampled his Republican competitors to emerge victorious in the gubernatorial recall election, which means that he’ll serve the remainder of his term.

Newsom’s victory was so swift and crushing, that political observers and pundits were calling the race in his favor less than an hour after polls closed on Tuesday, Sept. 14.

In response to the ballot question, “Should Gavin Newsom be recalled from the office of governor?” a resounding 67% of voters checked the “No” box based on results from 59% of the state’s 18,185 precincts.

Newsom went on to encourage Californians to eliminate division, negativity and cynicism as well as strive to provide examples of positive behavior to children. Also, Newsom cautioned people to stay aware because “Trumpism is not dead in this country.”

Alluding to statements promoted by former U.S. President Donald Trump, the governor said that “the big lie, the January 6 insurrection” and multiple voting suppression efforts occurring around the country were indications that many people continue to propagate discontent in America.

In light of these challenges, Newsom said, “The world is too small, our time is too short and our wisdom is too limited to win fleeting victories at other people’s expense. We must all triumph together.”

His closing words were, “I’m humbled, grateful, but resolved in the spirit of my political hero, Robert Kennedy, to make more gentle the life of this world. Thank you to 40 million Californians … for rejecting this recall.”

The state’s Republican contingent, anticipating a Newsom defeat, faced rejection as well with the top contenders tallying too few votes against the incumbent. The leading candidate, conservative broadcaster, Larry A. Elder, totaled 1.9 million votes, followed by former San Diego Mayor Kevin Faulconer, who received 412,797 votes, and businessman, John Cox, who garnered 208,121 votes. Reality star Caitlyn Jenner lagged further behind with only 52,041 votes. All of the numbers were based on reports from 53% of the California’s precincts.

While Newsom is projected as the winner, the numbers reported thus far are still considered unofficial. According to the website of California Secretary of State Shirley Weber, “Election results will change throughout the canvass period as vote-by-mail ballots, provisional ballots (including conditional voter registration provisional ballots), and other ballots are tallied.”

But for now, Gavin Newsom remains the governor of the State of California and that fact is perfectly fine with L.A.-area African American Democrats, who rallied the Black community to keep Newsom in office.

“We shut it down!” declared L.A. Councilmember Marqueece Harris-Dawson at a gathering at the Post & Beam restaurant in Baldwin Hills on September 14. Harris-Dawson was among the guests at an event organized by the African American Voter Registration, Education, & Participation Project (AAVREPP) to celebrate Newsom’s victory over the Republican recall.

L.A. County Supervisor Holly Mitchell, who also attended, credited the efforts of the AAVREPP in persuading Black voters to cast ballots against the recall.   “We were diligent.   We made sure to empower and educate the people of the community with the necessary resources to influence the polls. I am certain that we made an impact with voters; we worked tirelessly to help register people throughout the city and state, and guided them throughout the voting process,” she said.

“The Republican Party wasted millions of taxpayer’s dollars with this senseless recall, but I believe, collectively, tonight, we have made a powerful statement for justice and equality by keeping our governor in office,” noted Mitchell.

Similarly elated, Assemblymember Mike Gipson said, “We knew this recall was a ploy to hijack the governor’s office and I’m so happy that the voters of the State of California resoundingly rejected this diabolical plan to overturn democracy.

“Democracy showed up tonight and we won and I’m very excited about it. We galvanized the Black vote. When they thought, we weren’t going to show up at the polls, we proved them wrong,” he said.

“We need science, we need courage, we need leadership. We need Gavin Newsom,” Biden said during an approximately 15-minute address at Long Beach City College. “A governor who follows science, who’s got the courage to do what’s right.”

Biden sought to tie supporters of the recall to former President Trump, who is tremendously unpopular in California.

“You either keep Gavin Newsom as your governor or you get Donald Trump,” Biden told the crowd of approximately 1,100, including Sen. Alex Padilla, D-California, Los Angeles Mayor Eric Garcetti and Los Angeles County Supervisors Janice Hahn and Hilda Solis.

“The choice should be absolutely clear … Gavin Newsom. You have a governor who has the courage to lead.”
Elder had dismissed the presidential support for the governor. “If Gavin Newsom thinks that flying in Joe Biden and Kamala Harris – not exactly the most admired government officials at the present time – will make him look better, that’s all you need to know about how oblivious and detached Newsom is from a large majority of Californians,” Elder tweeted last week.

During an appearance in Monterey Park, Elder repeated many of the recall’s themes – criticism of Newsom’s handling of issues such as homelessness, crime and the COVID-19 pandemic, accusing him of “ignoring science” in the imposition of business and school closures.

Elder also shot back at recall critics who have labeled it a “Republican” movement. “There are 2 million people that signed that petition,” Elder said.

Elder is an outspoken opponent of government mandates – such as those requiring mask-wearing or receiving COVID vaccines – and had vowed to eliminate them immediately if elected.

From afar, Trump had repeated his refrain of questioning the integrity of recall election, suggesting without any evidence that the race was rigged — just as he did before and after he lost his presidential re-election bid to Biden.

In recent days, Elder picked up on that theme, with his campaign posting a link to an online election-fraud reporting website and the candidate himself refusing to say whether he would accept the results of the election.

With the victory, Newsom avoided the fate of former California Gov. Gray Davis, who was removed from office by recall in 2003. He was replaced by actor, Arnold Schwarzenegger.